I suppose y'all knew that Tim Curry was the voice of Dr. Anton Sevarius.

Was he even credited? I don't ever remember him being listed...

JIMMY - And I was referring to the "What comes out of a gargoyle?" question

I think Greg is playing dumb on purpose. He's been asked about the Giant's Dance before and refused to reveal any details about it, probably because it does involve the Lost Race and he doesn't want to give too much away. So now he's taking advantage of the vague reference to use that as an excuse why not to answer, rather than flat out saying, 'I'm not telling'.
Vash
Thursday, March 6, 2003 01:12:49 AM
IP: 129.98.123.136

One thought on the questions: you've definitely got to use the right words when you're submitting them, as the most recent answers made clear; somebody asked Greg about the "monolith" in the Archmage's cave, and Greg was baffled over what that person meant. I figured out that what that person meant by the "monolith" was that big magical stone or group of stones that the Captain of the Guard and Hakon were using to transfer Goliath's life energy to themselves in "Shadows of the Past", but apparently the questioner didn't make it clear enough. Maybe he should have called it a "megalith", instead.
Todd Jensen - [merlyn1@mindspring.com]
St. Louis, MO
Wednesday, March 5, 2003 06:51:19 PM
IP: 67.75.176.67

well, considering that there were 200 questions posted between May and July of 2002 alone...and that the numbers trickled off later...

BABS> I had to do that same task on my ferret last month. I still miss him. :(

My other one is still happy and healthy. (Thank goodness.)

One question: Why hasn't the 3rd post from the top of the Ask Greg Questions submitted page been cut for having questions about different topics on the same post?

Right under notices it says:

- Please post separate questions for each topic you wish to ask. If you have 3 or so questions about one topic (for example, Oberon) you may post them together. But if you wish to ask about multiple topics (for example, Oberon AND the Goliath/Elisa relationship) please make separate posts for each topic.
DPH
AR, USA
Wednesday, March 5, 2003 12:28:42 AM
IP: 204.94.193.74

That's great you are working on your degree. I'm almost finished with Com Studies here at Cal Poly. If you have Mary Plegger for any of your classes, tell her I said hi. She a good teacher who teaches at both campuses.

Hi all -- Just a short note to let you know I'm alive, well, but harried. Just started the MA program in Mass Communications at California State University, Fullerton, where I also work as a Grad Assistant in the School of Business. Also in the midst of writing my first animation scripts for a Japanese company, don't know if they'll make a deal to come to the US at this point (my original English scripts are being translated to Japanese). The online comic book FLYING GLORY's been suffering due to my being busy and its artist also being busy writing for aforementioned Japanese series. I hope you all are well, and sorry I can't make the Gathering in NYC this year. I've never seen NYC and hope to someday. All the best.
Shan - [shanemuir@aol.com]
Los Angeles, CA, USA
Tuesday, March 4, 2003 03:23:13 PM
IP: 137.151.53.93

BABS - Sorry to hear about your ferret. My condolences.

DPH - [Why was Macbeth trying to steal the Scrolls of Merlin and Excaliber?]

First off, the proper spelling is "Excalibur", not "Excaliber". (Sorry about that, but I've seen this misspelling a lot of times and it's close to a pet peeve of mine. I recall a particular occasion when I corrected that misspelling in an Arthurian newsgroup and the person who'd spelled it incorrectly proceeded to make some sort of linguistic argument claiming that "Excaliber" was the way that the name should have been spelled based on its original form in Old Welsh).

At any rate, I believe that Macbeth was probably planning to use the spells in the Scrolls of Merlin (before he found out what the Scrolls *really* contained) in his hunt for Demona. That was his No. 1 objective at the time, and Merlin's magic would certainly have come in handy in dealing with a highly-skilled gargoyle sorceress like Demona.

It's harder to say why Macbeth was going after Excalibur (if Greg Weisman ever does his "Pendragon" ramble, he might be able to shed some light on it). Much of it may have been the mystique of the sword and its being meant for an "immortal" medieval king - since Macbeth fitted that description just as well as Arthur did, it certainly would have been very tempting to claim it. (And maybe he was looking for a new objective, since I get the feeling from the end of "Sanctuary" that he'd laid aside his hunt for Demona).

Why was Macbeth trying to steal the Scrolls of Merlin and Excaliber? 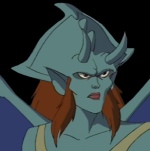 *Winces as he types*

Todd] I think Walt may have liked the series, if he saw it for it's entertainment value and that the episodes do include moral lessons. I'm sure he would not have approved of the way Eisner is running things.

This question was raised at the Toon Zone forum a while ago, and I thought that I'd mention it here this week.

4th in the name of the Fay!